Here’s the first vegan experiment update. Yesterday was the most hits my blog has ever had. More so than the Inca Temples. I’ts obvious what my audience wants. Apparently more about food and less about comedy.

I am almost constantly hungry. I’m putting this down to portion sizes. For some reason, eating a vegan diet has made my portion sizes smaller. I have made my way through almost a whole bag of apples throughout the day, but it’s not seeming to make a difference.
I’m thinking about food all the time. That’s not healthy, hopefully it’s just part of the newness of this.

I have learned a few key things. Coffee is much better black than with rice milk. Rice milk tastes much better on cereal when shaken properly. Work canteens are woefully inadequate at providing vegan options.
This was the only option available to me today. It was bland and unfilling. I did have the option of having chips instead of the potato. I’m not sure changing the shape of a food counts as an option. 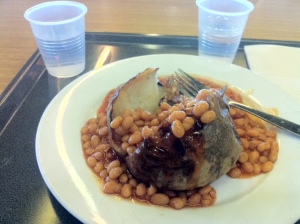 I am going out tonight[1], to see Richard Herring performing Christ on a Bike at the Comedy Box/Tobacco Factory in Bristol (review later!). This presents me with my first “eating out” challenge. The Tobacco Factory is surrounded by pizza places, kebab shops and fish’n’chips shops. Eating a bag of chips feels like cheating and is just a carb fest. There is an Aldi next door and a Tesco extra up the road.
I am trying to avoid the situation altogether. I have had some piri humous on toast and a soya yoghurt. But the gig wont finish for another 5 hours.

In short, it’s not going great. I’m struggling to think of things that I can eat, variety is going to be tricky. Especially while at work and out. What I am eating isn’t filling me.

Also, as is usual for me, I have managed to set myself a large and doomed to failure project to go alongside this large lifestyle change. As usual, it involves learning an entirely new skill[2]. If I’m going to fail, I’m going to do it properly.

[1] Melanie, I did tell you about this, repeatedly, and most recently last night. I wont be home until late.

It IS on the calendar.

No I didn’t just add it. I booked the ticket last December!